The history of coffee dates back centuries. It is not known who was the first to discover that the beans of the coffee tree could be dried, roasted, ground and brewed into a drink, but hats off to them. Coffee is now the world’s most popular beverage (after water) with around 1.6 billion cups of coffee drunk worldwide everyday. 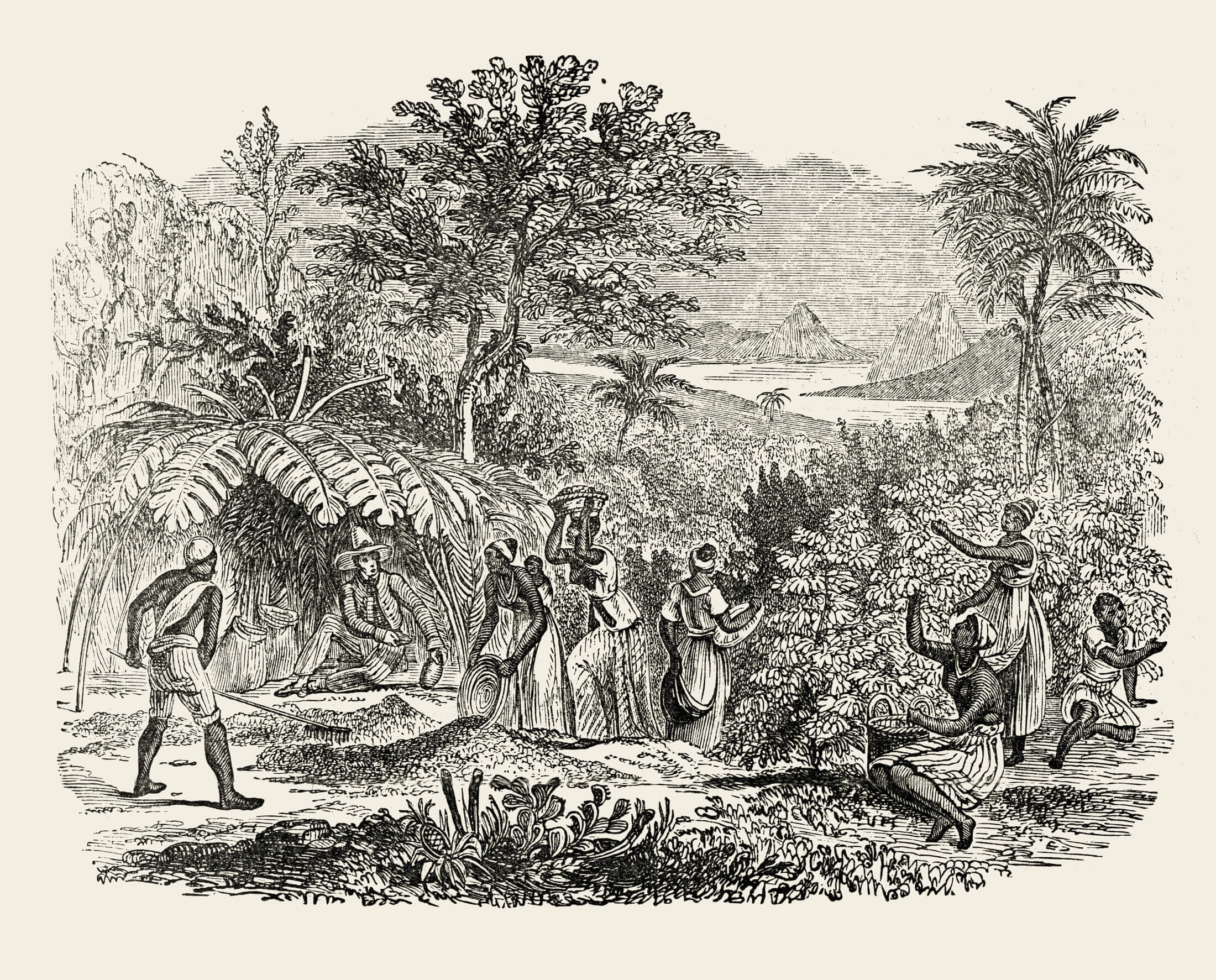 No one really knows exactly who or when coffee was first discovered, but we do know it was in Ethiopia, and legend credits Kaldi, a goat herder, with its discovery. One day Kaldi found his goats darting and jumping around after eating berries from a tree he had not seen before. He tried the berries himself and suddenly felt all kinds of energy and excitement.

The Ethiopians have been credited as the first to gather coffee from trees growing wild in the forest. It is thought that the coffee cherries were chewed at first, or the beans ground with fat to make energy bars.

Later the Ethiopians brewed the leaves with boiled water and made a weak tea.

Sometime in the 1400s someone roasted the beans and discovered how good they smelt. They ground them and brewed a black, potent beverage. Coffee!

Ethiopians have remained proud of their coffee. It's considered to be a family beverage that brings friendship and kinship. Even today, if you go into any home in Ethiopia, the family will prepare coffee before any other dish.

The Ethiopians follow an elaborate coffee ceremony that's centuries old and commemorates the memories of three Sheiks who went into the wilderness in search of God. When the Sheiks had almost starved God appeared and instructed them to grind coffee beans for food.

Only the women of the house can roast the coffee beans. When the beans begin to crackle they are ladled onto a metal plate and blessed by the spirits of fertility and prosperity. There are always three servings of coffee to honour the three Sheiks. The brew is thick and strong. The eldest member of the family is always served first.

The Arabs began the first know cultivation of coffee in the mountains of Yemen.

Nobody really knows where the word 'coffee' came from but it's thought to have been the Arabs who named it rather than the Ethiopians.

Soon, thanks to the Sufis, coffee spread from town to town as a holy ceremonial drink. Wealthy people set up entire rooms devoted to coffee drinking and the poor gathered in coffee houses.

In 1511, the Governor of Mecca tried to ban the coffee houses. However, the Sultan of Cairo, the Governor's boss and a coffee lover himself, reversed the order. 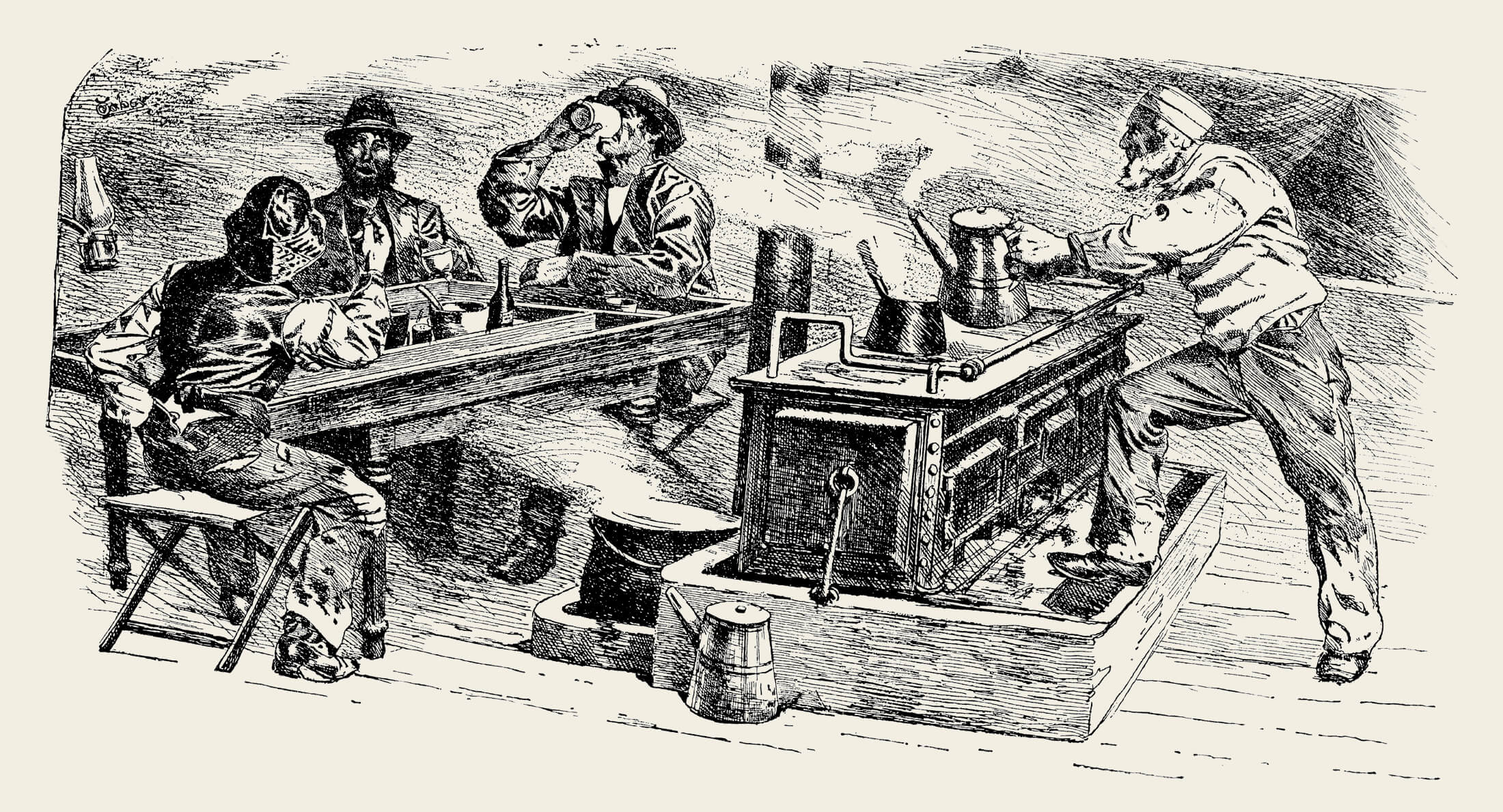 As the Turks conquered the Arab world they inherited coffee and the coffee culture. Coffee secured a place of itself in the lives of everyday people.

Coffee readings were (and still are) important to young women in Turkey. A young woman can have her future divined in the grounds in her cup.

Coffee became a very precious commodity in Turkey and the Turks were very careful to keep the monopoly. Eventually a young man names Baba Budan taped some coffee seeds to his body and smuggled them out of the country. He began to grow coffee in India.

Soon the Dutch got hold of the seeds and began growing them too. They transported them to the colony to Java where native slaves were forced to cultivate the coffee. By 1683, Mocha and Java were the most sought after beans and coffee was poised to conquer Europe.

Coffee came to the west with a bad reputation. Italian priests regarded the black brew as a threat to Christianity. They petitioned the Pope to ban it, but when he tasted it he found it so delicious he decided to baptise it instead.

The Turks began to trade with Venice and the first cafe, the Florian opened in 1720 and over the next 30 years, hundreds of cafes opened. There were cafes for the poor, cafes for the rich and cafes for the foreigners.

Italians love their coffee and have greatly enriched the worlds coffee culture. The espresso machine was developed in Milan, Italy and created a coffee that is strong in taste, aroma and body but weak in caffeine because there isn't time to extract all the caffeine from the ground coffee.

It wants until the late 1600s that coffee made it to France. It was introduced by the Turkish Sultan, the Ambassador to Paris.

The French are enamoured with coffee but they don't know how to make it. An Italian, Francesco Procopio de Coltelli, seizes on this opportunity and introduced the French to the French cafe. The women were the first to embrace the cafe society. They would come for tea, coffee, chocolate and pastries. Soon the men came too. People began to engage each other in intelligent conversation and debate as coffee came the beverage of choice, ahead of beer and wine. The first coffee house in London opened in 1652 by Pasqua Rosse.

The English are well-known tea drinkers, but by the 1700s there were over 2000 coffee houses in London alone.

London's coffee houses spawned may of the city's important businesses and customs. Patrons tossed coins in a bowl labelled 'to insure promptness' (TIP), and it is thought this is where tipping was born.

Coffee houses became the centre of London's social scene. Without alcohol patrons could visit and have meaningful conversations about the world around them.

In 1700, Europeans were consuming half a million pounds of coffee. One hundred years later, their consumption had grown to 100 million pounds.

The French were eager to expand their trade. The opportunity comes when a young French Lieutenant charms a royal mistress and she gives him a coffee plant which he nurtures on a voyage to Martinique. Most of the coffee grown in Latin American probably descends from that one plant.

The French establish large slave run plantations to cultivate the coffee. The plantations spread to Haiti and by 1790 half of the worlds coffee was grown on this one island.